Lory Martinez is the Colombian American Founder and CEO of Studio Ochenta, an award-winning multilingual podcast company dedicated to raising voices across cultures through fiction and nonfiction podcasts in 26 languages and counting.

This list is a multicultural mix of shows I listen to when I’m not working. I love to get a sense of what's going on across narrative fiction and nonfiction from unique perspectives around the world.

80 stories collected from creators around the world in lockdown. Studio Ochenta asked creators to send us pitches answering the question: “What do you want to hear when this pandemic is over?” The answers we received span 5 continents and over 20 languages translated to English for the world to hear. It’s a great show to binge and travel around the world with your ears.

Recommended episode: Bonsai - In this episode, a producer in Rome writes an ode to his lockdown companion: his bonsai plant.

From Studio Ochenta and TRAX on PRX, Cultureverse is an immersive audio drama that celebrates our collective cultural past. It is a place where myths and legends come alive in the modern world. In each episode, an ordinary kid encounters an extraordinary creature, myth, or folk character from their culture, embarking on an exciting journey of self-discovery. It’s a show I wish was around when I was a kid.

Recommended episode: The Water Dragon - In this episode of the audio adventure series, Chinese American kids David and Jenny find a magical blue stone that turns into a water dragon.

A latina Texas ranger investigates a serial killer in Austin. Starring Stephanie Beatriz, this audio novella is immersive, smart and fun. It's hyperlocal to Texas culture but still so relatable, and I love Stephanie Beatriz!

How to Talk to [Mamí and Papi] about Anything

A documentary series that deals with cultural and societal issues that BIPOC/first and second generation folks face with their parents from Lantigua Williams and Co. Guests are from all different backgrounds, and the host interviews an expert for advice on how to proceed. Every episode answers so many questions I’ve faced myself as a first generation latina growing up. Definitely have a listen!

A British audio drama about a promising young woman who follows the instructions of a soft voice in her head. When the voice disappears, the woman starts losing her grip on reality. It is an excellent production out of the UK for QCODE, and I found myself bingeing it because of the clever use of sound design using the “inner voice”.

Twenty Thousand Hertz is a series about the ins and outs of sound design. It is one of my favorite series to listen to as a podcast producer because I learn so much about the nuances of my peers in the industry. Definitely recommend the Foley Artists episode that does a deep dive into the foley artists at Warner Brothers.

Businesswomen, artists, creators, writers, producers from the latina community talk about their fears, failures and successes. As a latina business owner, this show has inspired me so much. Definitely listen to the recent episode with America Ferrera for insights into how she got into the industry as a WOC.

Jenna Wortham and Wesley Morris are culture writers at the New York Times talking about the cultural moment we’re in. One of my favorite episodes is the Whitney Houston homage they did back in 2017; a delight to hear her story through their nostalgic commentary.

David Tennant does a Podcast with...

As far as celebrity podcasts go, this is one of the only ones I really enjoy because of Tennant’s hosting style. He’s very relaxed and so the conversations with guests which range from Whoopi Goldberg to Elisabeth Moss are really fun and light.

WNYC Studios and Futuro Studios present “La Brega: Stories of the Puerto Rican Experience”: a seven-part podcast series about the Puerto Rican experiment. The show is in English and Spanish. I’m not a big basketball fan but I loved the storytelling in the Basketball Warriors episode. 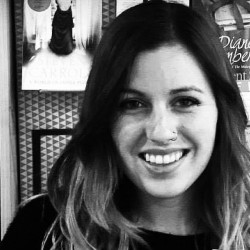